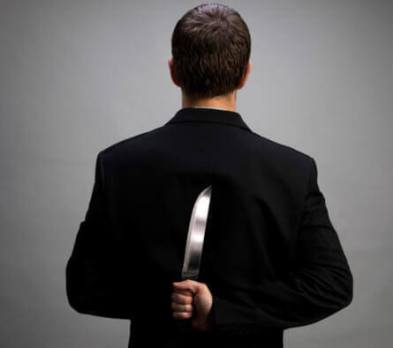 There’s an old Russian proverb about two farmers that goes something like this: One farmer grew enough potatoes to power a Wise factory for years (clearly, I’m modernizing). His neighbor barely sprouted a potato to distill into a shot glass (stereotyping, too).

One day, a genie comes to the unsuccessful farmer and offers to grant a single wish. What do you think the peasant asks for? A better harvest? Riches to retire in Crimea? Tickets to Hamilton?

“I wish for you to destroy my neighbor’s farm,” the poor farmer pleads.

This story is supposed to symbolize a historic attitude among many Russians—that tearing down those around you brings more satisfaction than lifting yourself up.

Russians aren’t the only ones afflicted with schadenfreude. I recently came across a couple of not-so-new studies suggesting why some employees go low when other achieve high. In “Victimization of high performers: The roles of envy and work group identification” and “Is it better to be average? High and low performance as predictors of employee victimization,” researchers delve into how less successful coworkers sometimes attack their more accomplished counterparts. They lie, gossip, undermine, deny resources—basically, they become Regina George.

Not like you need a bunch of papers to confirm what you already know: Envy mixed with an inferiority complex can cause people—maybe even you—to mutate into total jerks. At the same time, workers who overestimate their performance and don’t get the respect they think they deserve may also conspire to undercut peers.

At one company I worked, there was chitchat about two senior leaders cheating on their spouses with each other. True or not (probably not), I sensed that some people were wielding the rumor as a weapon.

So, how can companies promote a high-performing culture in the face of a spiteful counterculture? One recommendation is for flourishing employees to consider “downplaying their accomplishments and maintaining a humble outlook to avoid potential victimization in the future.”

Wait. What? No. That’s like telling Jodie Foster that if you smile and gyrate provocatively at a bar, you’ve got to expect really bad things to unfold by the pinball machine.

The best thing that organizations, and high-performers, and low-performers, and every other performer can do to create environments that encourage everyone to be their best is focus on building relationships. As I’ve repeated about 4,762 times, no one ever bonds over an Excel spreadsheet, so the more opportunities colleagues have to relate to each other in personal ways, the likelier they will be to to care about each other. Not just as coworkers but as humans.

And when you care about people, you’re less apt to screw them over. Better still, you’re likelier to help them, and them you. Here are some basic ways to make that happen:

1. Ask your colleagues how they’re doing—and not in the usual way you blurt your question as a substitute for “hello.”

3. Then talk about your weekend. Ta-da! An actual conversation!

4. Ask your coworkers for help when you need it.

5. Help them when they ask you.

7. Go to lunch with colleagues. Talk about pets, vacations, yeast infections, alcohol issues, Erika Jayne‘s new song (yaaas!). Try not to discuss work. And get this…

You don’t actually have to care about your colleagues. You only need to pretend to care. That’s not being fake. That’s having good manners. I inquire about coworkers’ children all the time. Like I give a shit! I hate kids, but I ask out of politeness, and after enough times, I stop asking out of politeness. Instead, I end up asking because…now I give a shit.

It’s OK to form superficial relationships. They’re the genesis of almost all the meaningful ones in our lives. We are the world.